Reno to Washington DC via Dallas Fort Worth (DFW)

Most of the day sitting in a plane or an airport

We left home this morning at 5.00am and arrived at Reno-Tahoe Airport in 15 minutes due to very little traffic. The airport was quite busy and we were a little sad to leave. This was in contrast to our arrival five days ago when we were met by Bill and Ann amidst a small group of flag waving family and supporters welcoming home a Detachment of the Nevada National Guard on home from rotation in Afghanistan.

After arriving at DFW (2 hours ahead of Reno time) we had a 2 hour stopover before we left at 2.30pm for what should have been a three hour flight to Baltimore, Washington DC. The plane taxied out to a runway and sat for half an hour before the captain said we had to negotiate another flight plan and we didn't have enough fuel. So..... Back to the terminal for another hour and a half to refuel. 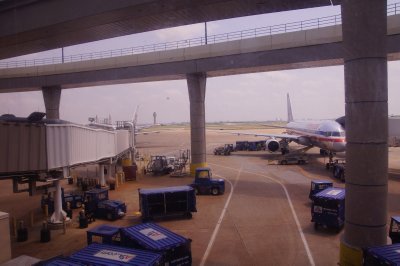 Flying in the US is relatively cheap. The average age of aircraft is considerably higher than in Australia. All of our flights with American Airlines so far have been in older narrow bodied DC9s.

We finally arrived in Baltimore Washington Airport at 8.45 pm. Luckily we had arranged transport into our accommodation. Our unit is quite nice and is very handy to the centre of Washington just off Constitution Avenue.

As we hadn't eaten for quite some time we went to the Union Pub around the corner at 10.30pm. We have now decided to order one meal between us as the portion sizes of just about everything here are enormous. The drinks special was 5 bottles of Budweiser Beer in a bucket of ice for $10.