Last night's dinner and visit to Crazy Horse and travel to Cody, Wyoming

Last night was an absolute spectacular part of our trip with a visit to Crazy Horse about 20 miles from Keystone and approximately 17 miles from Mt Rushmore. This is an absolutely fascinating story of a man dreaming big. The largest monument carved into a mountain, a social development project with university, medical training facilities and centre to be developed over many years. He knew it would not be completed in his lifetime.

In 1939 Ziolkowski's marble sculpture of Ignacy Jan Paderewski won first prize at the New York World's Fair. The fame as well as his familiarity with the Black Hills prompted several Lakota Chiefs to approach him about a monument honoring Native Americans. Chief Henry Standing Bear of the Lakota wrote to him, saying, "My fellow chiefs and I would like the white man to know the red man has great heroes, too."

Ziolkowski met with the leaders shortly afterward and began planning a monument. Over the next few years, he conducted research and began planning the sculpture. He also met Ruth Ross, a young art enthusiast, who would later become his second wife. Ruth still lives on site and is the CEO of the Crazy Horse Foundation at the age of 87.

In 1947 Ziolkowski moved to the Black Hills, and began to search for a suitable mountain for his sculpture. Korczak thought the Wyoming Tetons would be the best choice, where the rock would be better for carving, but the Lakota wanted the memorial in the sacred Black Hills on a 600-foot (180 m)-high mountain. The monument was to be the largest sculpture in the world. When completed, it would be 563 feet (172 m) high by 641 feet (195 m) long. Crazy Horse's head would be large enough to contain all the 60-foot (18 m)-high heads of the Presidents at Mount Rushmore.

On June 3, 1948, the first blast was made, and the memorial was dedicated to the Native American people. In 1950 Ziolkowski and Ruth Ross, who had become a volunteer at the monument, were married. Work continued slowly, since he refused to accept government grants. He raised money for the project by charging admission to the monument work area.

Ziolkowski continued his work until he died of acute pancreatitis at the monument site in 1982. He was buried in a tomb at the base of the mountain. After his death, his wife Ruth took over the project as director of the Crazy Horse Memorial Foundation. Seven of his ten children have continued the carving of the monument or are active in the Crazy Horse Memorial Foundation. 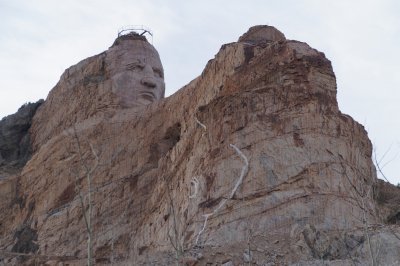 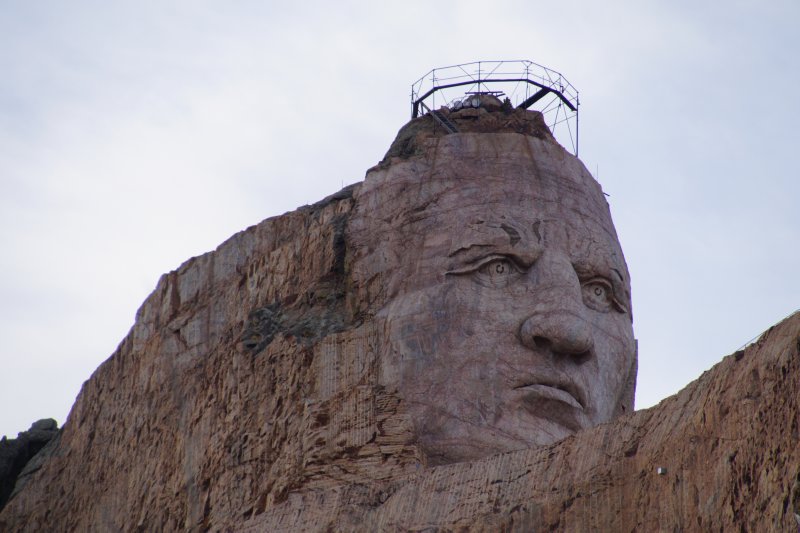 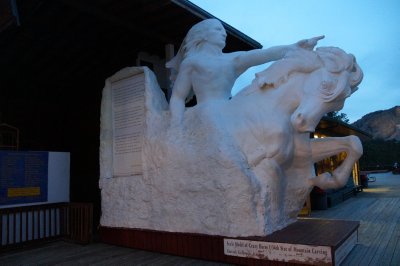 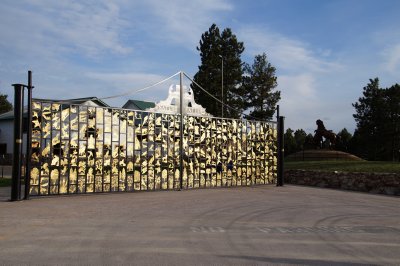 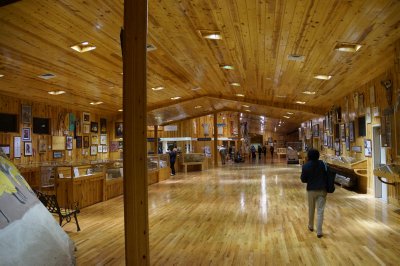 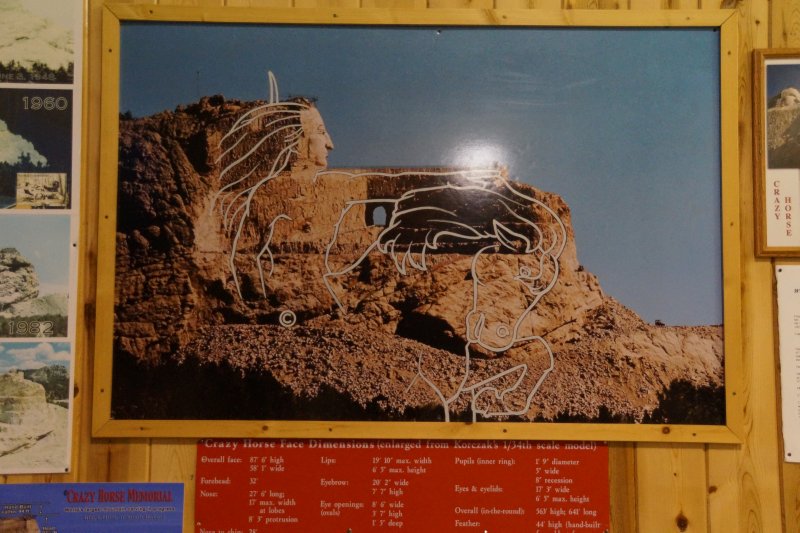 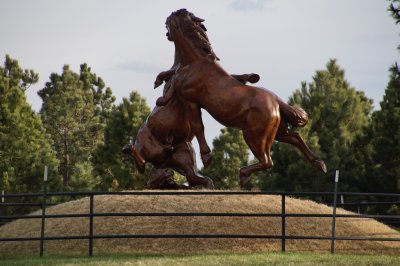 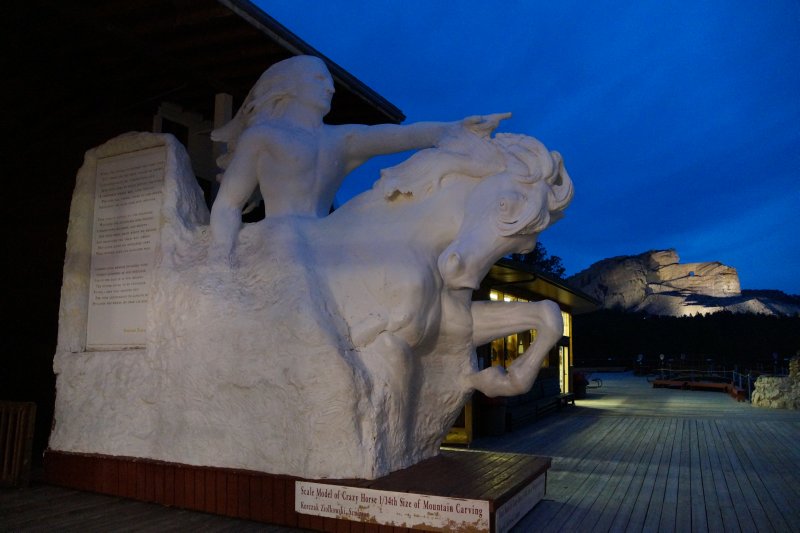 Scale model of Crazy Horse with mountain in background 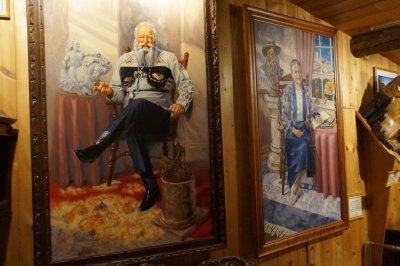 Mr &#38; Mrs Korczak Ziolkowski - they had ten children and most still live and work here. 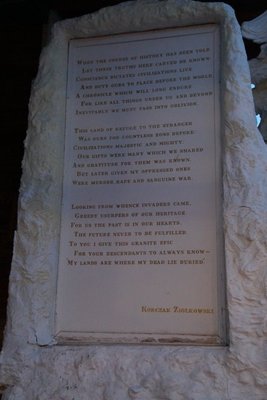 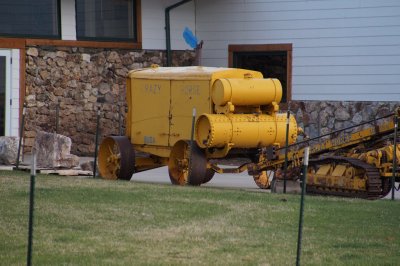 Buda Compressor used in early days at Crazy Horse Monument. Korczak had to walk up and down 700 steps to re-start the compressor, nine times one day.

We woke early to another long day of travel of 666km to go from Keystone to Cody today. This morning we headed through rich, mountainous country to Buffalo, where open-range cattle kings made war on the sheep ranchers of the 1880's.

We drove to Sheridan, the scene of many fierce battles between the US Cavalry and the Sioux, Cheyenne and Crow Indians. 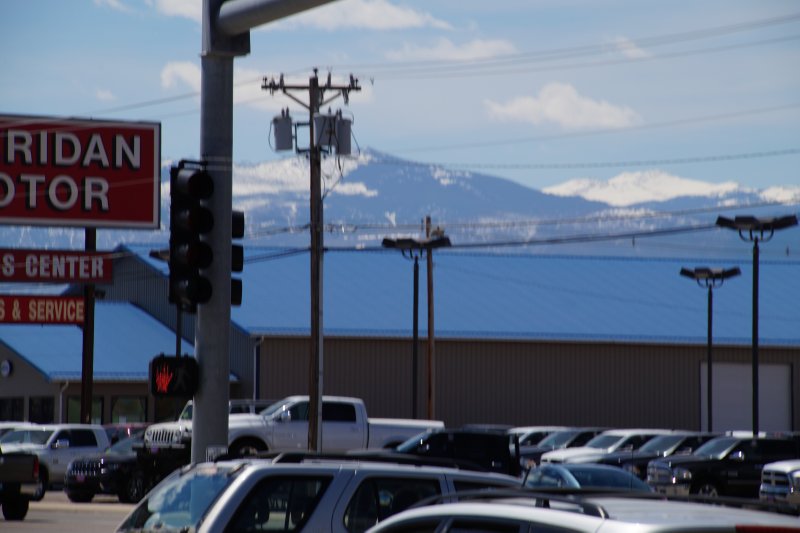 Sheridan - we cross the mountains seen in the background

Then we climbed over the Bighorn Mountains en route to our overnight stop in Buffalo Bill's frontier town of Cody. 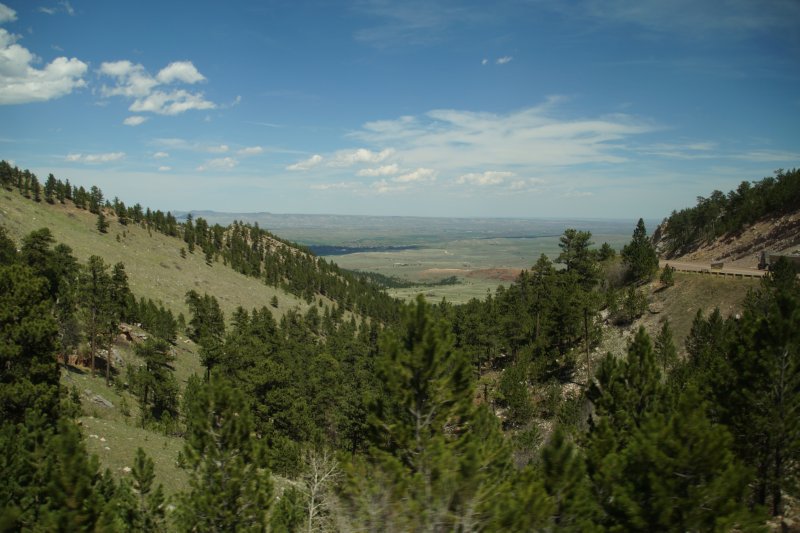 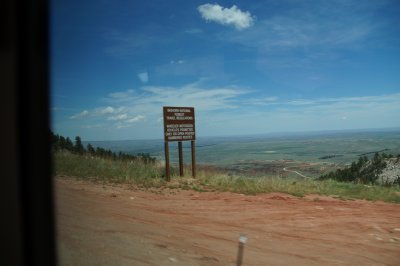 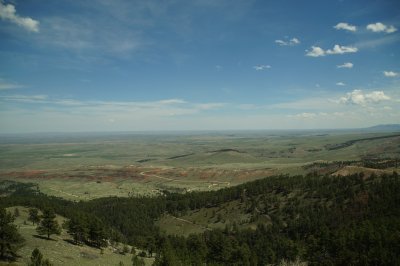 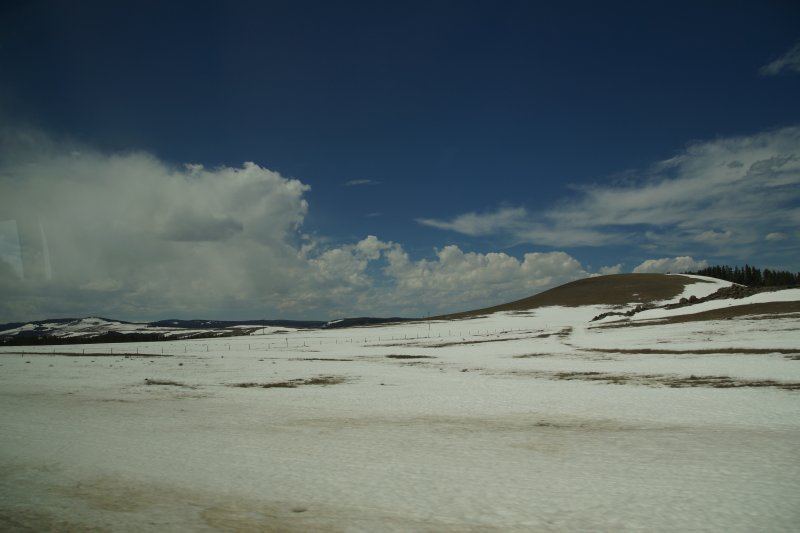 The bighorn national Park is spectacular. We stopped at Bear lodge for our afternoon break. People we talked to said that snow was up to their armpits in mid april and only two weeks ago they had a foot of snow. 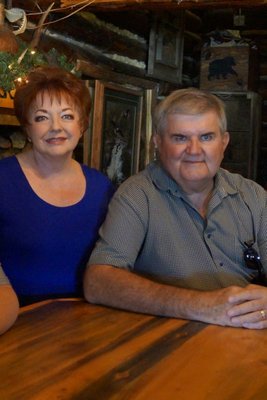 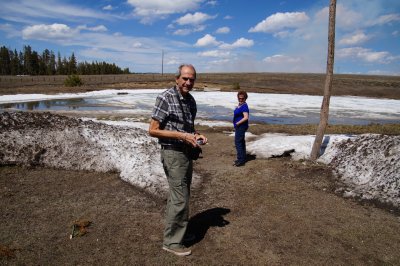 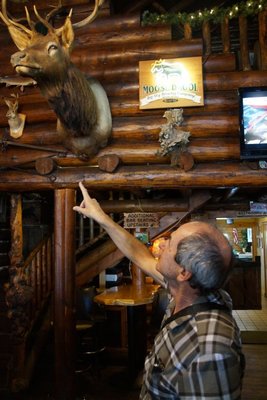 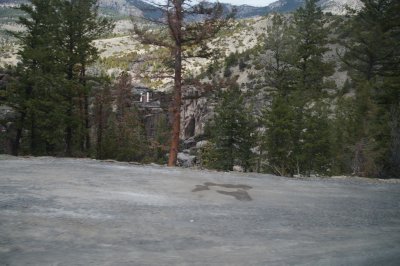 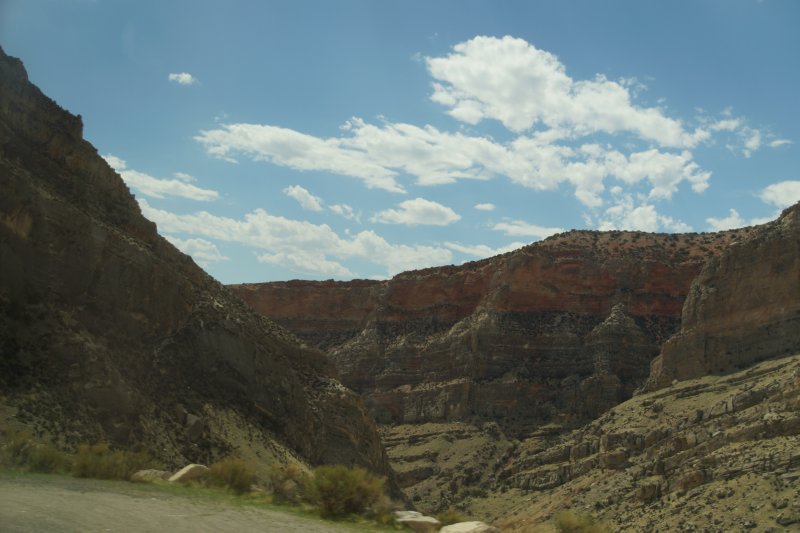 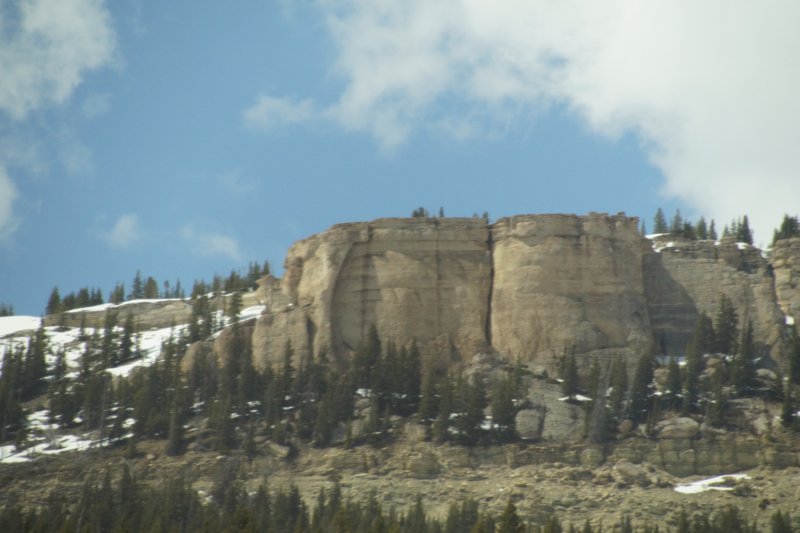 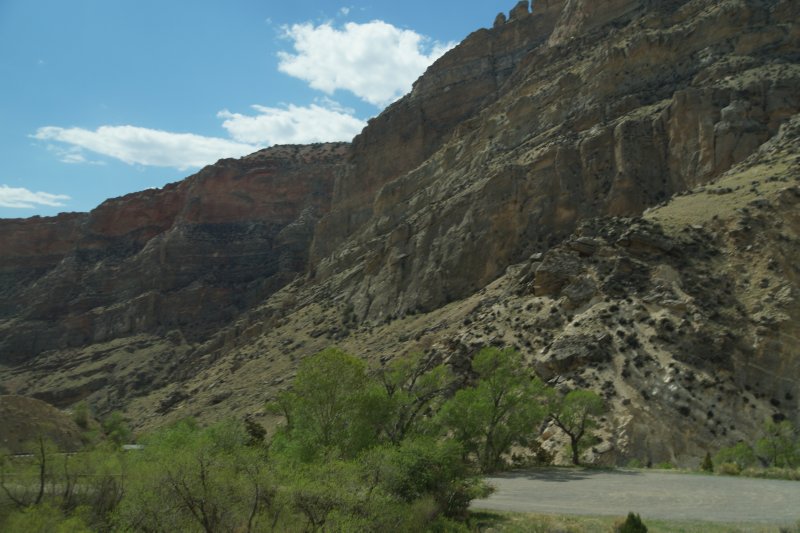