Two Fridays in one week Australia one day - Reno the same day!!

We were met at Reno Airport by Bill and Ann, our Reno friends. Colleen met them on one of their many world travels 27 years ago in Greenvale, North Queensland. They are just the nicest couple in the world.

Reno is in northern Nevada in the desert. Reno sits in a high desert valley at the foot of the Sierra Nevada.

Known as "The Biggest Little City in the World", Reno is famous for its casinos and is the birthplace of the gaming corporation Harrah's Entertainment. The Reno–Sparks metropolitan area is informally called the Truckee Meadows and consists of nearly 500,000 residents.

This morning we went to My Favourite Muffin and Bagel Shop for coffee (Well actually we had never been there before so it must have been someone elses favourite.) We met Bill and Ann's friends Dave and Della, David and Barbara and David and Colleen. There seems to be a bit of a pattern here. 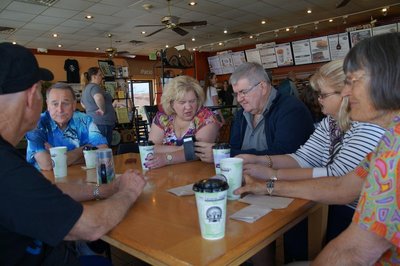 Bill and Ann are proud of their connection with Australia. 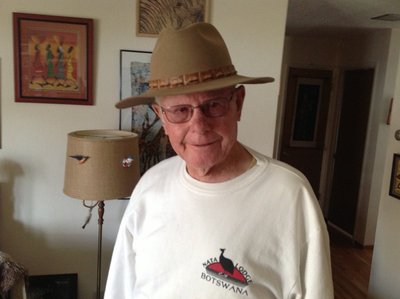 Bill with his hat - Australian made of course!

Hi Guys
Sounds like you are off to a great start on your adventure. Reno sounds fascinating - love the updates!