We are clearly in count down mode now.

Here is a photo of Ilca who has the apartment we are renting in LA with her best friend, Curtis. Curtis met us last Sunday to let us in to the apartment and give us the run down on the local area. Both are actors. Ilca is from Cape Verde and speaks five languages. 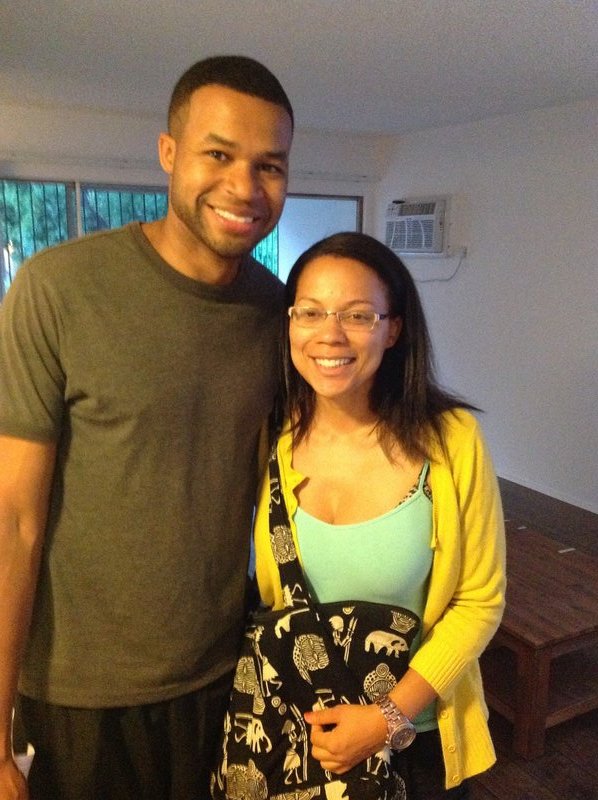 Cape Verde, officially the Republic of Cape Verde, is an island country, spanning an archipelago of 10 islands located in the central Atlantic Ocean, 570 kilometres (350 miles) off the coast of Western Africa. The islands, covering a combined area of slightly over 4,000 square kilometres (1,500 sq mi), are of volcanic origin and while three of them (Sal, Boa Vista and Maio) are fairly flat, sandy and dry, the remaining ones are generally rockier and have more vegetation.

Today we headed off on the red route of the Hop On Hop Off bus again. 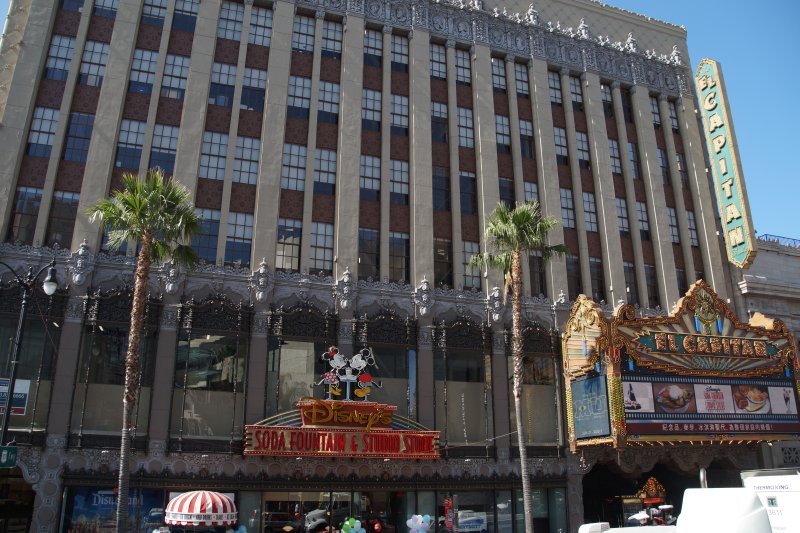 We were going to the Petersen Automotive Museum. It is located on Wilshire Boulevard along Museum Row in the Miracle Mile neighbourhood of Los Angeles. It is one of the world's largest automotive museums, a non profit museum specialising in automobile history. Not the entire collection is displayed at the one time. There is only about 150 vehicles on display with the other half in storage. 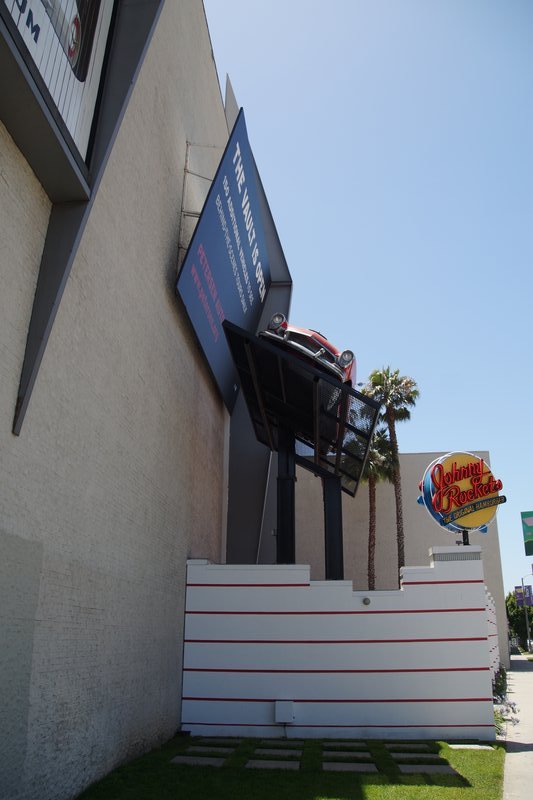 There are vehicles previously owned by "stars" eg Fred Astaire. There is also the BMW driven by Tom Cruise in Mission Impossible IV. Other vehicles from Batman and a couple of the Bond movies are also on display. 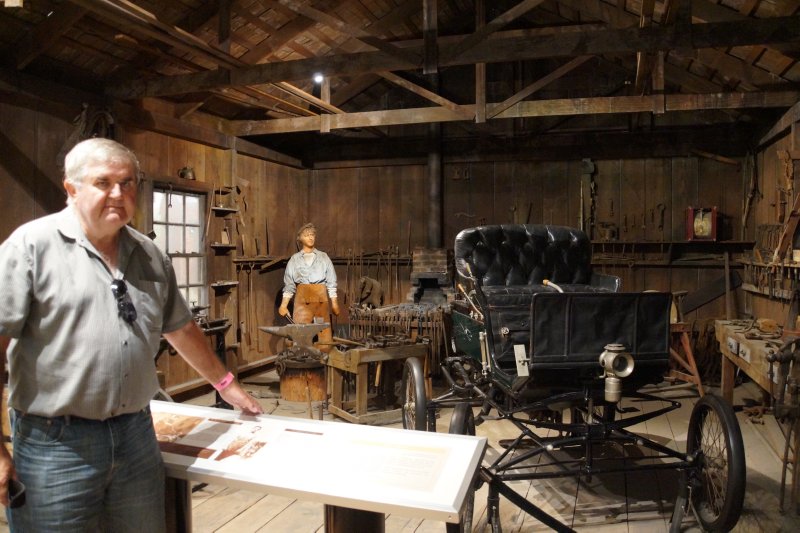 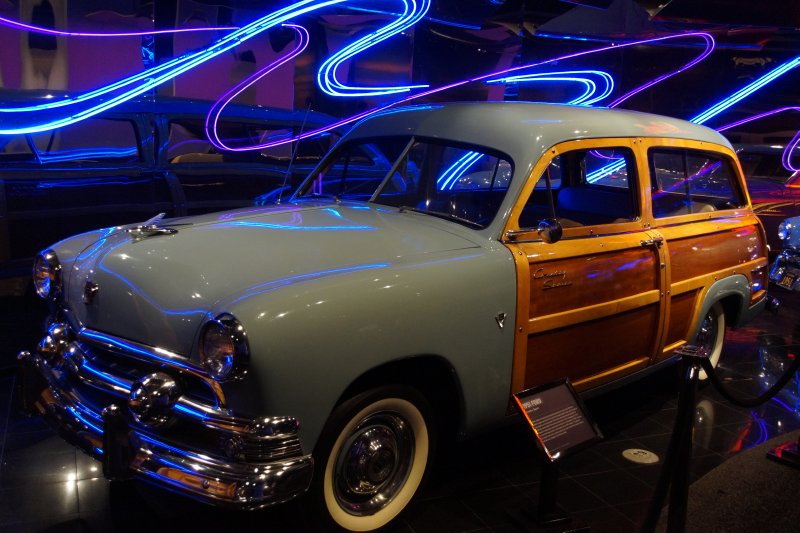 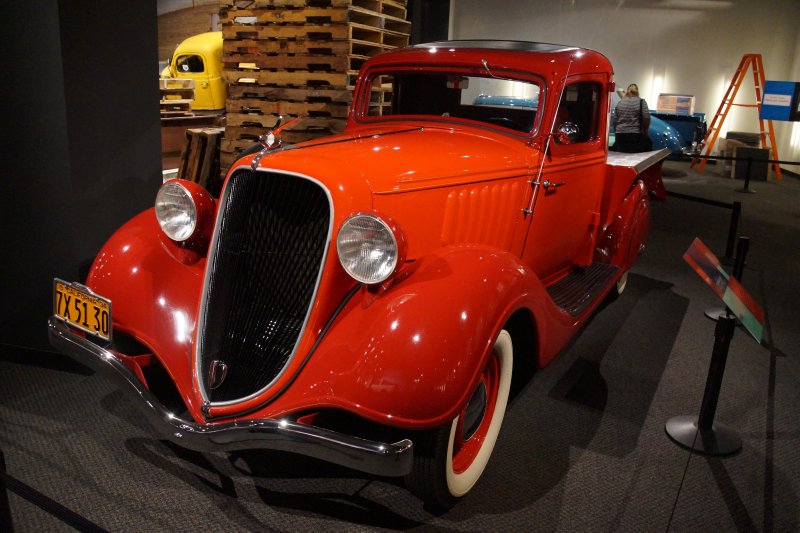 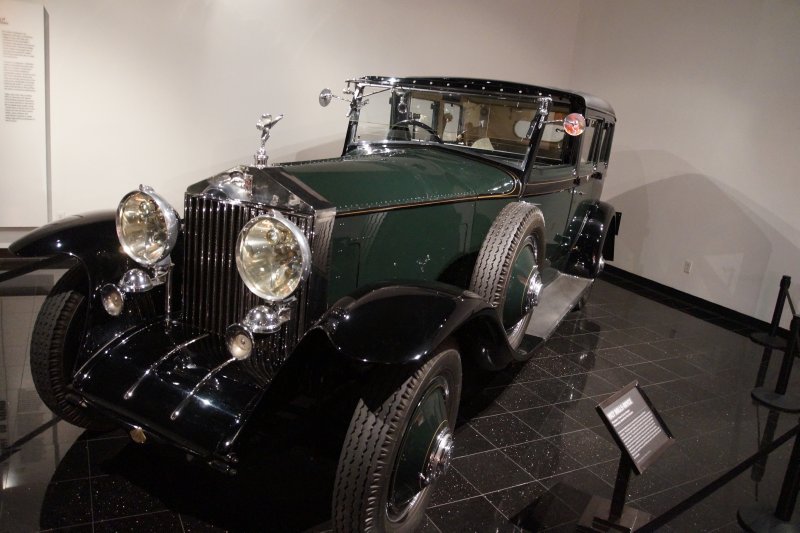 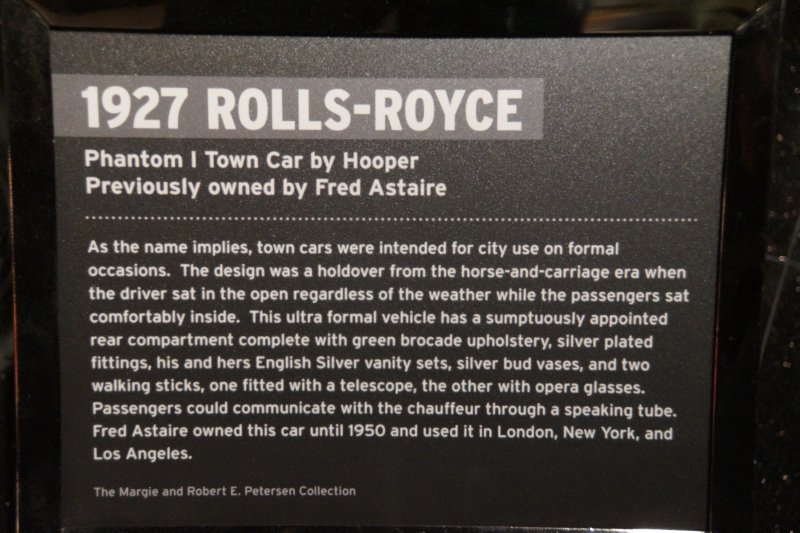 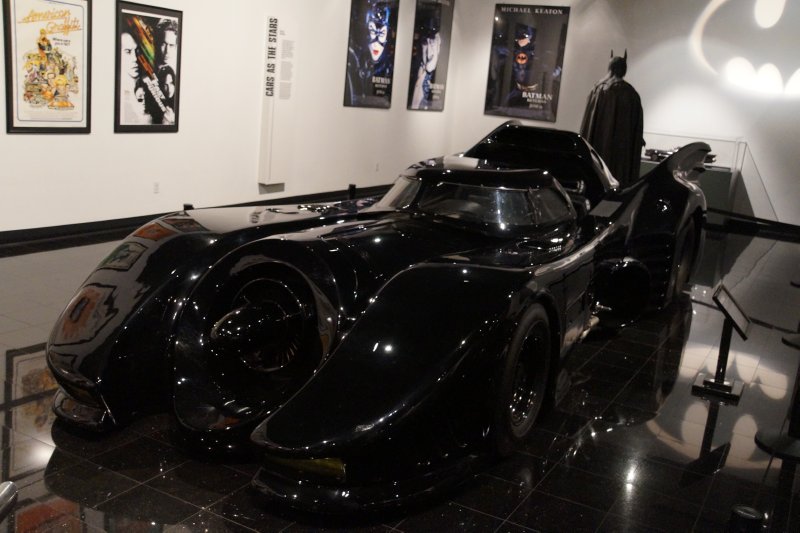 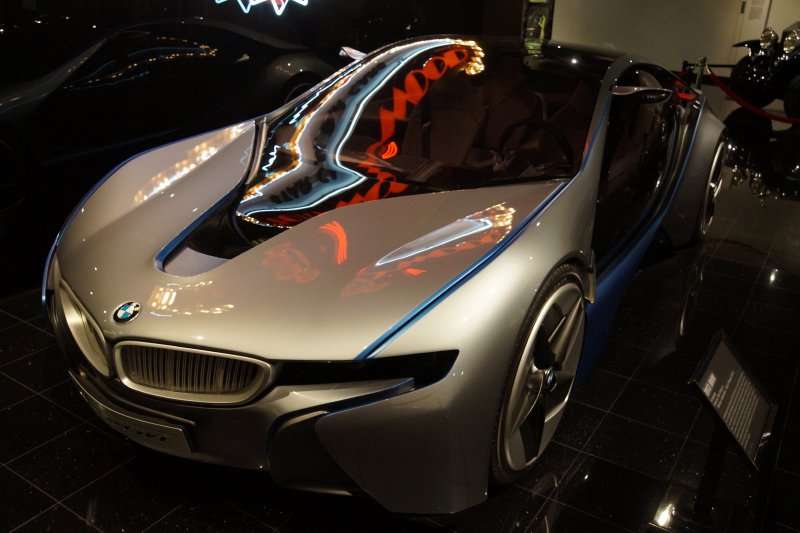 Next stop was Pink's hot dogs. Pink's was founded by Paul and Betty Pink in 1939 as a pushcart near the corner of La Brea and Melrose. The Great Depression was still having an impact on the country, and money was scarce. People could purchase a chili dog made with Betty's own chili recipe accompanied by mustard and onions on a steamed bun for 10 cents each. As business grew, thanks to Betty's chili and the custom-made Hoffy-brand hot dogs with their natural casings, so did Pink's. The family built the current building in 1946 at 709 North La Brea.

There is usually a long line of customers in front despite the lack of parking in the area. The often slow-moving line is viewed by some as part of the attraction at Pink's, especially on Friday and Saturday nights when the stand becomes packed with club and concert goers.
Pink's has its own parking-lot attendant, even though parking is free. According to the menu, Pink's original signature chili dog in stretched, 10"/25 cm form remains the stand's top seller.

We stood in line the best part of an hour. Didn't see anyone notable. Well maybe a bronze statue of John Wayne and his horse could count. 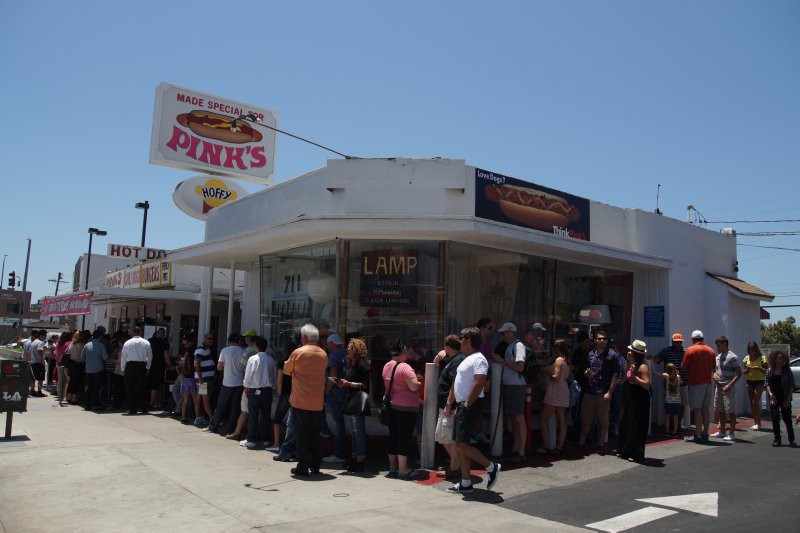 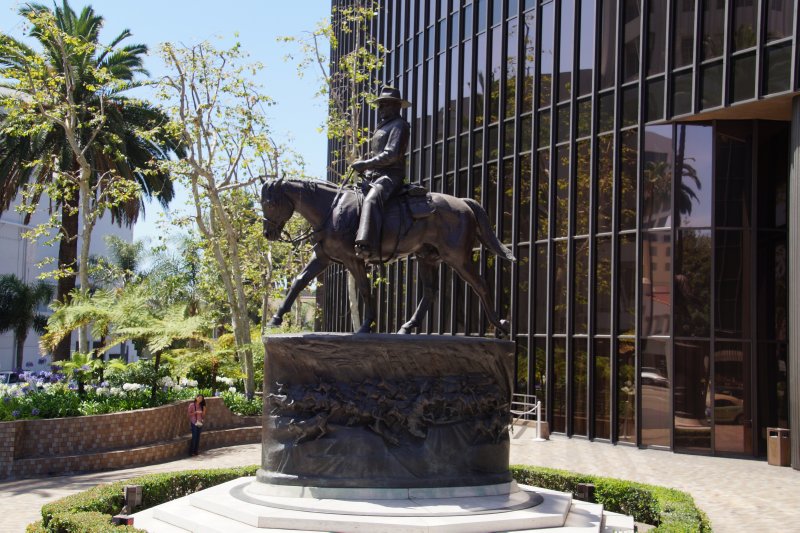 This afternoon we headed back to the apartment for me to pack up and David to go to the J Paul Getty Museum. The Getty Museum houses European paintings, drawings, sculpture, illuminated manuscripts, decorative arts, and European and American photographs.

The Getty Center, in Brentwood, Los Angeles, California, is a campus for the J. Paul Getty Trust founded by oilman J. Paul Getty. The $1.3 billion center, which opened on December 16, 1997, is also well known for its architecture, gardens, and views overlooking Los Angeles. The center sits atop a hill connected to a visitors' parking garage at the bottom of the hill by a three-car, cable-pulled tram. The center draws 1.3 million visitors annually.

It is one of two locations of the J. Paul Getty Museum. This branch of the museum specializes in "pre-20th-century European paintings, drawings, illuminated manuscripts, sculpture, and decorative arts; and 19th- and 20th-century American and European photographs". Among the works on display is the painting Irises by Vincent van Gogh. Besides the museum, the center's buildings house the Getty Research Institute (GRI), the Getty Conservation Institute, the Getty Foundation, and the administrative offices of the J. Paul Getty Trust, which owns and operates the center. The center also has outdoor sculptures displayed on terraces and in gardens. Designed by architect Richard Meier, the campus includes a central garden designed by artist Robert Irwin. GRI's separate building contains a research library with over 900,000 volumes and two million photographs of art and architecture. The center's design included special provisions to address concerns regarding earthquakes and fires. 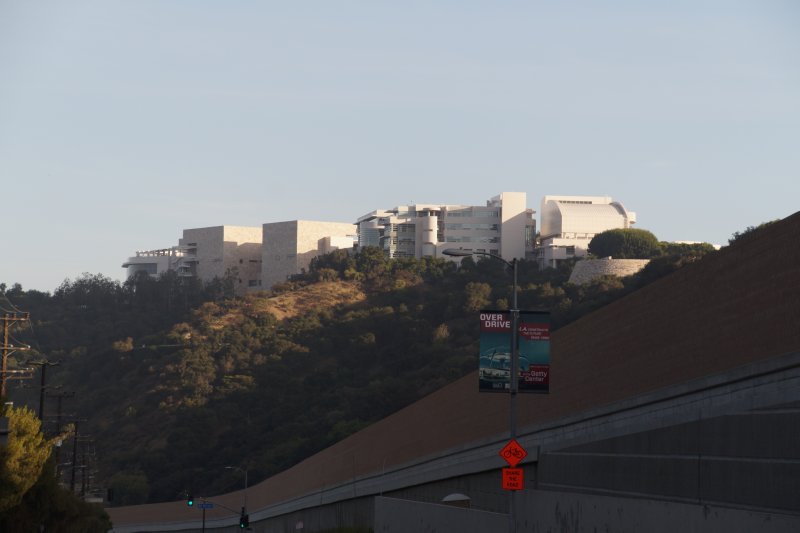 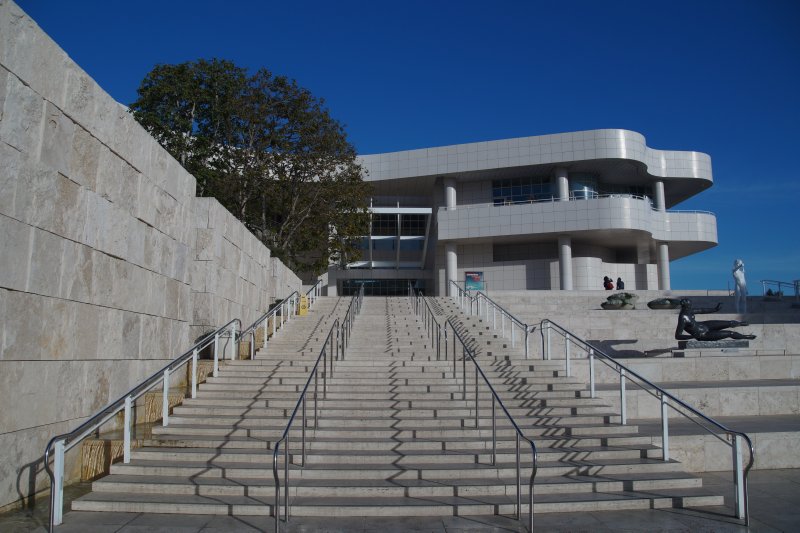 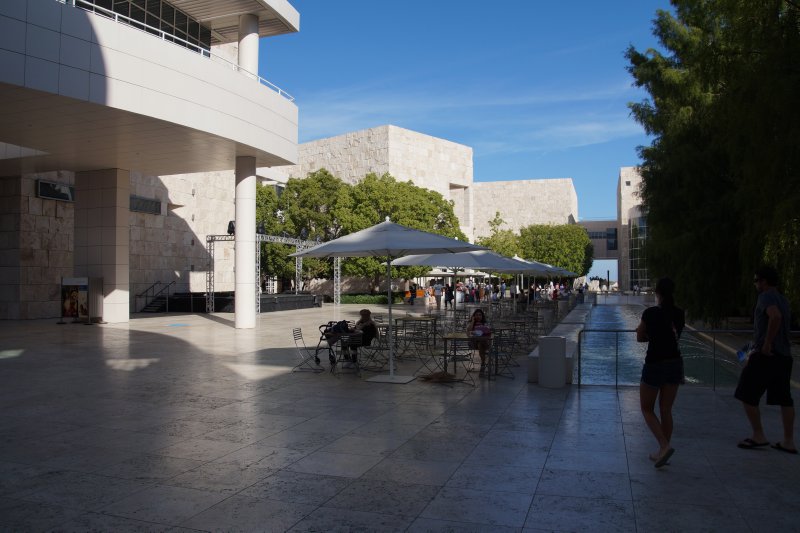 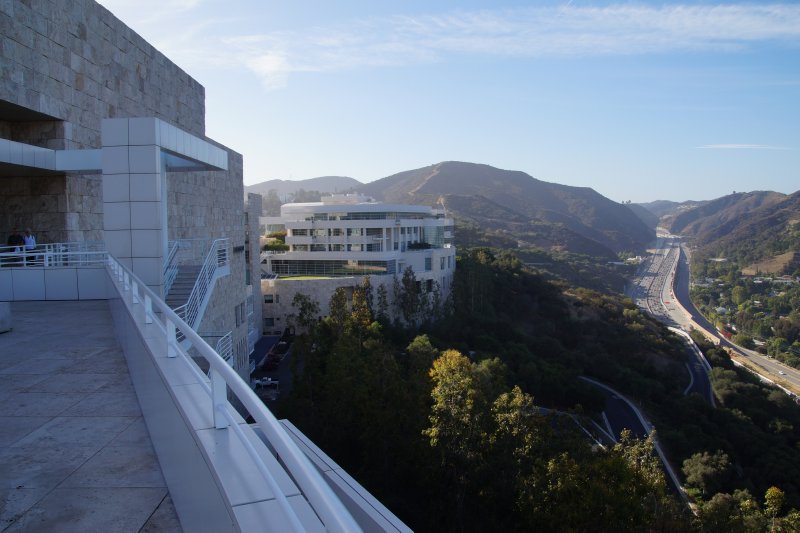 Panorama of View from Getty Center over LA 1

Panorama of View from Getty Center over LA 4

Panorama of View from Getty Center over LA 6 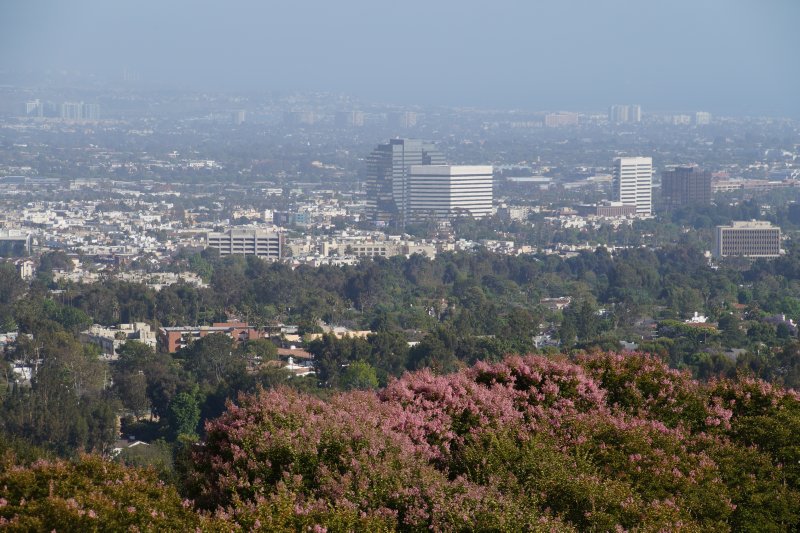 View from Getty Center over LA 3 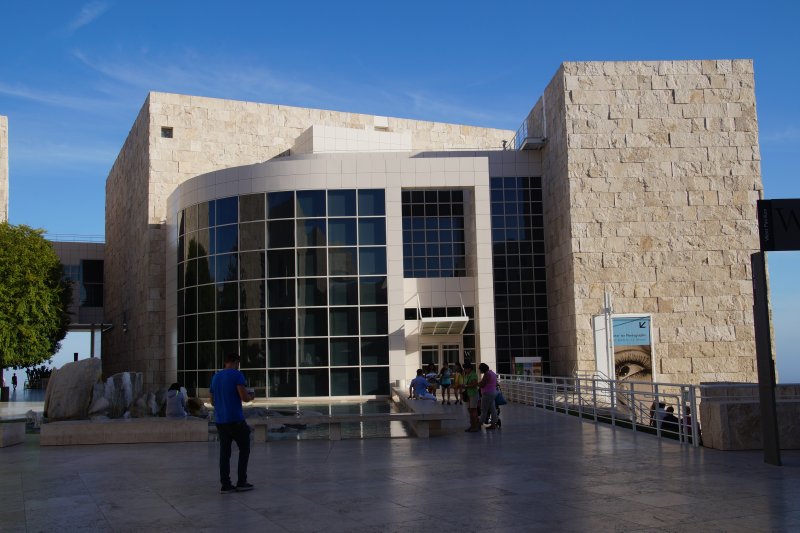 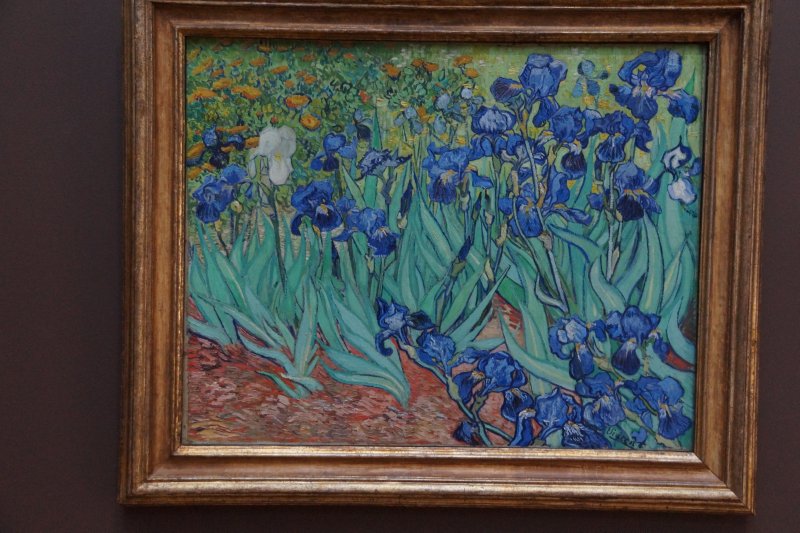 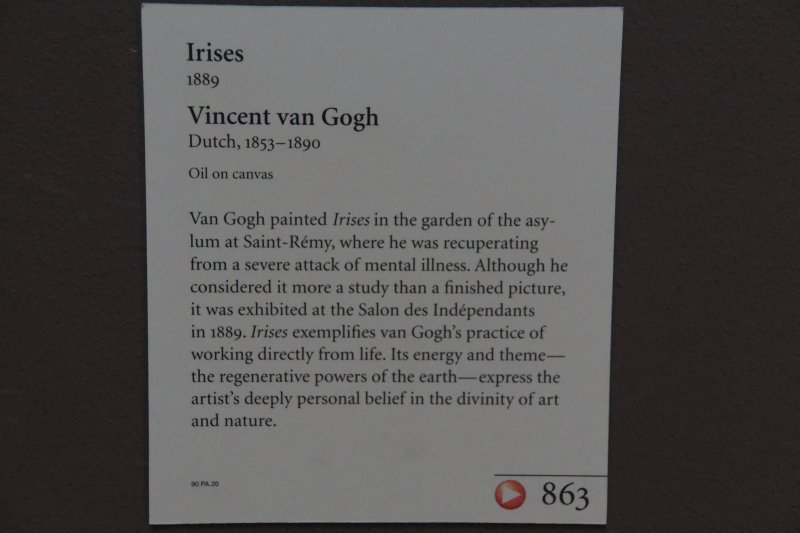 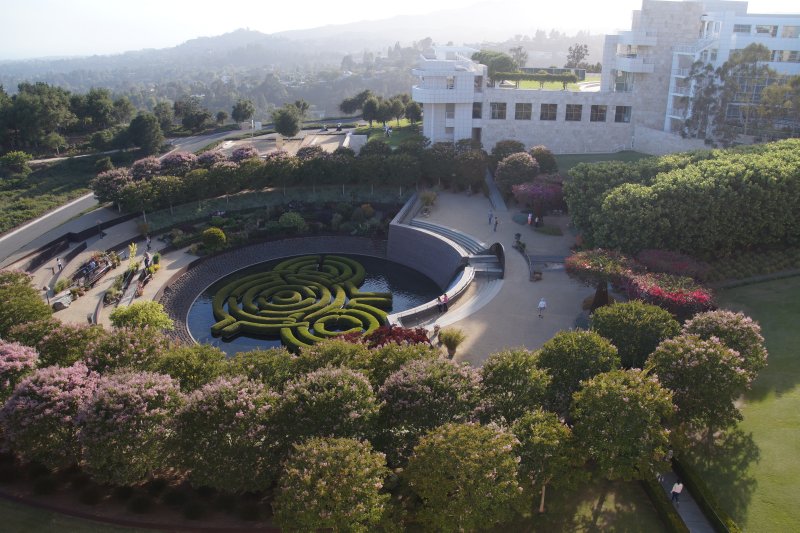 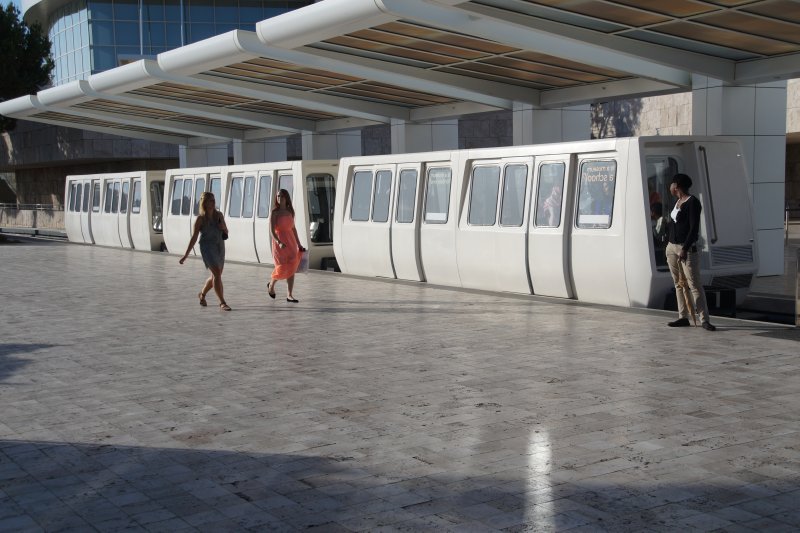 3 car tram takes visitors up and down Getty Center 1 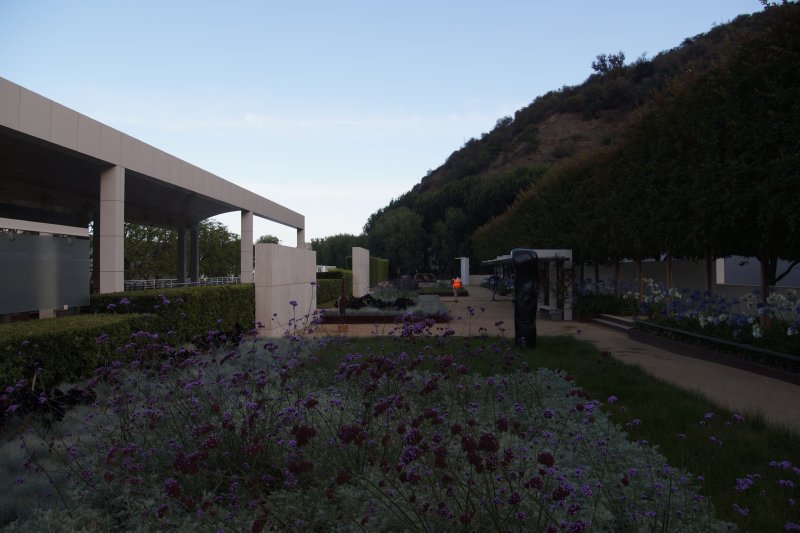 Today is our last full day in the US. We left home on 12 April and will return on Monday morning, 24 June after we lose a day by flying through the night. We'd love to thank all those people who have willingly or maybe not so willingly posed for photos so that the blog has some interesting photos and snippets of information. David has enjoyed writing and taking the photos, and checking every morning to see how many viewers he has. There is no doubt, if you give David a job, he does it with lots of energy and due diligence. We hope you have enjoyed reading about our travels and maybe for some, it will spark an interest in travel across the world or if not, maybe it has been a lesson in American history.

What a great expedition and the sights and venues you visit absolutely amazing. Thanks for the explanations with the pics.
Regards Ken and Jan